What appeared to be a regular zip file could not be successfully extracted. Each extracted file would be empty or contain junk bytes. The file hierarchy could be read, and none of those files were password protected. Could there be some actual corruption in the zip, or was something else going on?

Various extractors complained about corrupted data, or crashed in mysterious ways, such as jar xvf with java.io.IOException: Push back buffer is full.

Our zip was an instance of a xod, which is a web optimized xps used by the web viewer PDFTron. A xps is functionally similar to a pdf: it is organized as a hierarchy of pages (xml) and detached resources contained in those pages (fonts and images). The xod has some changes in the hierarchy, but the underlying implementation uses the same xml elements as a xps.

We can grab a xod example and list files with unzip -l (to improve readability, the following was formatted with tree):

This hierarchy matches the one present in the invalid zip.

Hypothesis: It seems all files are present, so maybe our issue is in the metadata.

Attempting to fix it with zip -F or zip -FF didn’t work (the latter recreates the central directory listing, so that can be ruled out of the issue). Therefore, a manual approach was needed.

To explore this metadata and check if all its values were valid, we used kaitai_struct, in particular the Web IDE: 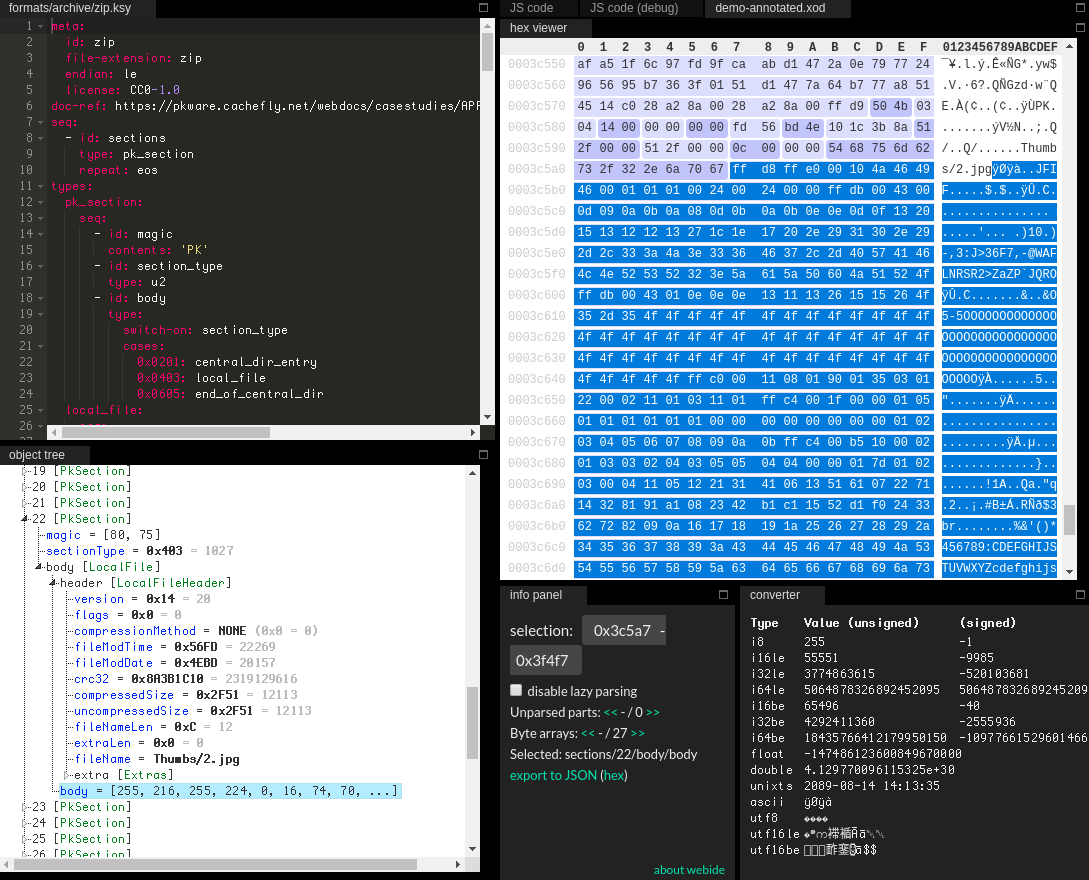 In addition to the IDE, a parser can be generated, so that general purpose scripting can be done on a zip file:

To iterate through all PkSection fields in our scripts, the generated parser was modified to keep track of each starting address:

We can aggregate the files under observation by file type.

As a result, the magic bytes of a jpg file are preserved inside the body field. Even if this file format didn’t have magic bytes, we could still observe other artifacts, such as sequences of bytes with the same value.

When comparing fields of this example zip with the invalid zip, some differences become explicit:

Therefore, it would be unexpected if bit sequences 110 or 111 were present. We grabbed a valid xod with a larger file count, similar to the one in the invalid zip file, to count and compare the first 3 bits of each PkSection/LocalFile/body inside each zip:

First 3 bits for DEFLATE compressed files in a valid vs an invalid zip:

First 3 bits for uncompressed files in a valid vs an invalid zip:

For the invalid zip, we do get unexpected sequences, proving that the compressed data isn’t just a DEFLATE stream.

If this was the case, kaitai_struct would error out while parsing the file. In addition, this can be easily checked by subtracting the addresses of the next PkSection magic bytes with the start of the body.

Hypothesis: Another compression method is actually being used, but it was overwritten with DEFLATE and NONE.

These methods can be ruled out by bruteforcing through all possible values, with the following steps:

Hypothesis: There is password protection, but the metadata that specifies this feature was cleared.

Marking a file in a zip as password protected is as simple as setting fields PkSection/LocalFile/LocalFileHeader/flags and PkSection/CentralDirEntry/flags with value 1.

We still need a password. The invalid zip is used by a closed-source application. After decompiling it, finding the hardcoded password was just a matter of running a proximity search for keywords xod and password:

However, simply using the password didn’t result in a successful extraction.

According to the PDFTron docs, AES encryption can be applied to a xod. In our application, we can find the call to the mentioned web worker constructor (which is how we found out that PDFTron was being used, in addition to keywords DecryptWorker.js window.forge aes).

The SDK is available for download with npx @pdftron/webviewer-downloader.

The decryption web worker lies within the suggestive file webviewer/public/lib/core/DecryptWorker.js.

We now have all the pieces to decrypt our files: encryption method (AES), password and filenames (both are used to build the AES key), and the source code for decryption. It’s just a matter of getting it to run.

Web workers have an elaborate message passing protocol that wasn’t worth it to setup and getting to work under node. A more simple alternative was to include the web worker as a module:

There was an issue with parts of the code that referenced missing definitions:

Now we could directly call the function that would be called in the postMessage() handler:

After decrypting the files, those that were compressed with DEFLATE still needed to be “inflated”.

This part was heavily minified (unminify accomplished some constant folding, but the logic was still pretty obfuscated), so the methodology was a bit more involved:

Some points of interest started to emerge:

It can be transformed into a module by exporting the actual API function:

Then it’s used in our script, with the result written to a file:

With the files decrypted and decompressed, we can put them under the same filesystem hierarchy as described in the original zip, then create a new zip with that directory’s contents. The result will be a valid unencrypted xod.

Available in a git repository.